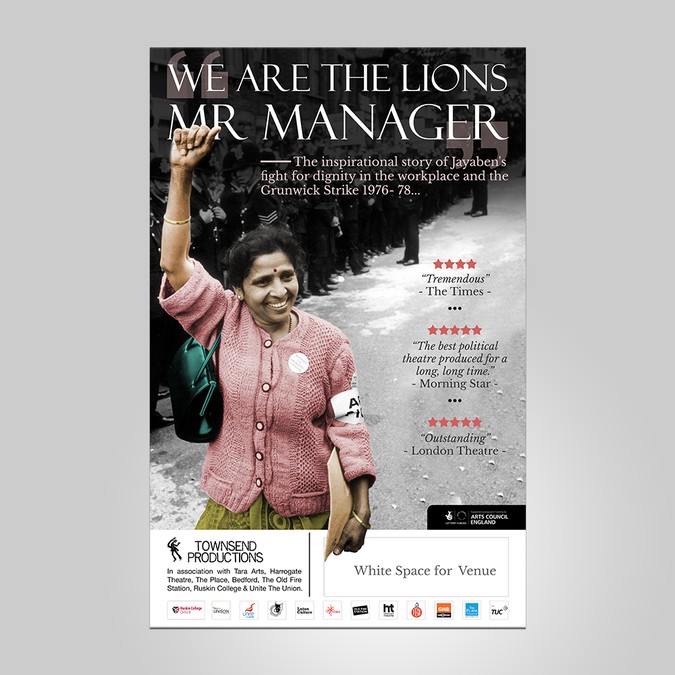 townsendproductions needed a new poster design and created a contest on 99designs.

A winner was selected from 35 designs submitted by 4 freelance designers. 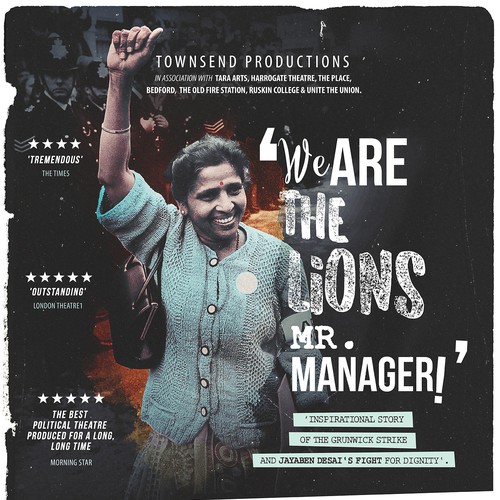 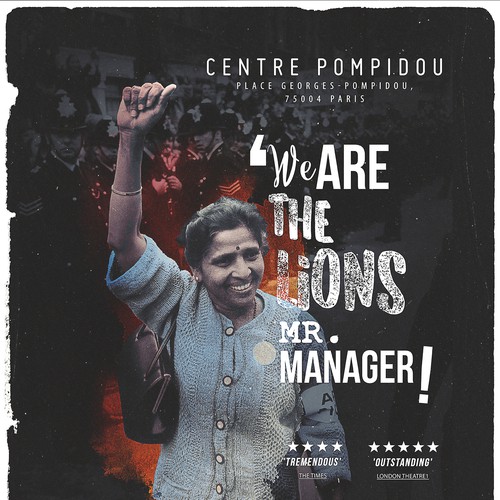 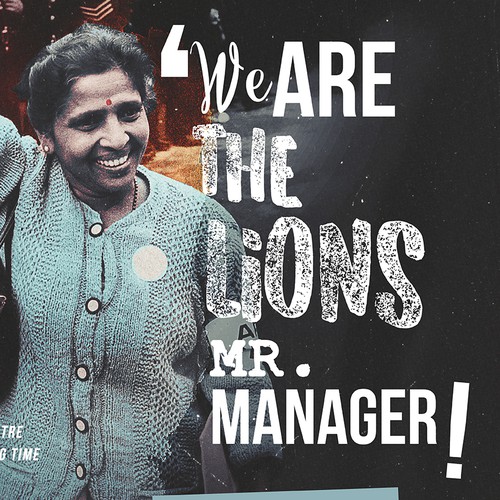 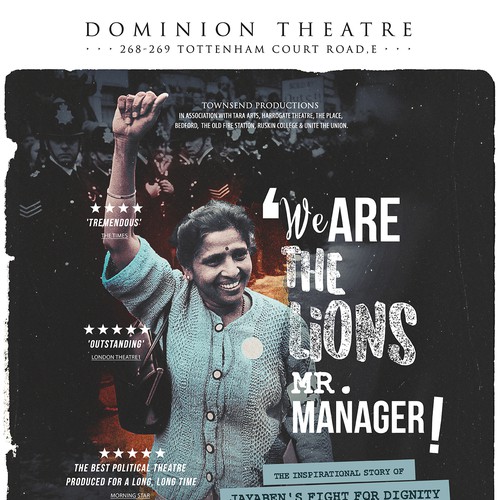 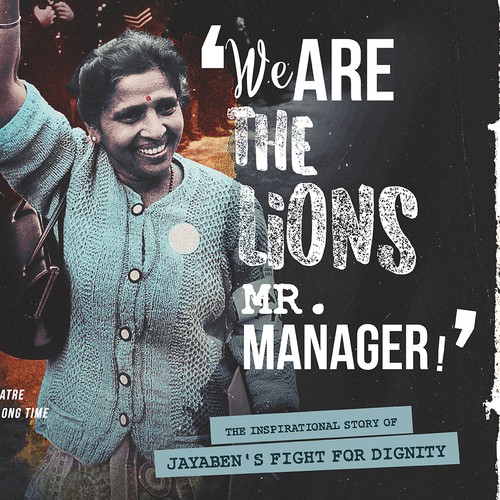 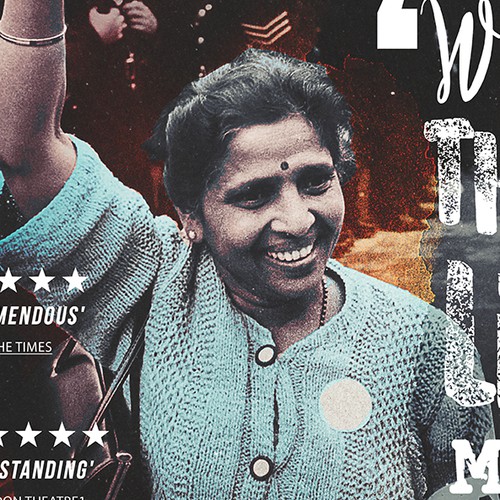 Winner - Erudite"
Erudite has a great taste and works quickly and customer oriented. Thanks to Erudite, my single can go online before the year ends. Happy New Year to you all!
- MaciekN

How townsendproductions started their poster journey

Townsend Productions
Townsend Productions set up as a collaboration of experienced, highly-skilled theatre practitioners in 2011...
*...the collaboration regularly includes me, Louise Townsend, as Producer
Neil Gore as Writer/Actor
folk music legend John Kirkpatrick as Musical Director
and New Vic Theatre Stoke’s Lighting Designer Daniella Beattie
*....we have toured productions of
The Ragged Trousered Philanthropists
We Will Be Free!
United We Stand
and currently Dare Devil Rides To Jarama
*....each tour takes in about 60 venues nationwide from the Highlands to Cornwall, from West Wales to Lowestoft.
*....so far all the productions have had a cast of two which guarantees a purely theatrical approach to the epic social historical subjects that we undertake.
The main aims of the company: are
1. to create live theatre of the highest artistic standard that is relevant, innovative, challenging and ultimately entertaining.
2. to take our theatre to non-theatre venues for audiences that find access to theatre centres a challenge or are not themselves regular attendees. So as well as theatres and arts centres we perform at community centres, village halls, trades clubs, schools, pubs, conferences and festivals.
3. to form effective links with trades unions on national and regional levels, theatre and education organisations, campaign organisations, trades councils.
4. to promote to a wider audience stories and issues of special interest to these groups, and work with these groups to promote individual performances.
5. to use drama and education to explore social, political and historical issues, and open up channels of participation through audience interaction – workshops, exhibitions, post-show discussion, etc.
6. to work closely with associated organisations and supporters, artisitic and educational, to enhance audience development through developing appropriate marketing strategies.

Our New show ( see below) we have bought the rights to an image that we really like for the show but need it put into a theatrical poster design.
ABOUT
‘We Are The Lions, Mr. Manager!’ is the story of the Grunwick Film Processing Factory Strike of 1976-78 and the inspirational strike-leader Jayaben Desai, one of many newly arrived British passport-holding Asian Gujurati workers expelled from Uganda and Tanzania in East Africa four years before.

In 1976 a group of workers in a backstreet London factory, in Willesden, stood up to their bosses and kick-started one of the longest and most important industrial disputes in British history. Led by Asian women, the Grunwick strike challenged stereotypes, changed the face of traditionally white, male trade unions, and inspired others to speak out against injustice.

Grunwick wasn’t just a strike about wages and conditions – it was about something much more important than that: it was about dignity. Dignity at work. These women had been employed by the Grunwick factory bosses in the belief that they would be easy to handle, to browbeat and to exploit. Yet, they found their own distinctive voice in the course of the struggle to secure their rights.

The strike leader, Jayaben Desai had the measure of the most brutish and charmless of her managers, when she told them: ‘What you are running here is not a factory, it is a zoo. But in a zoo there are many types of animals. Some are monkeys who dance on your fingertips, others are lions who can bite your head off. We are the lions, Mr. Manager!’

Grunwick made history:
1. it focused the issue of the exploitation of immigrant workers,
2. it nailed the myth that Asian workers were passive
3. it showed how a section of totally unorganised workers, ignorant of trade unionism and insecure in a foreign land can develop militancy and attract huge solidarity
4. it defined the trade union and political lives of tens of thousands from across the nation who came to the streets of Willesden to back the Grunwick workers.
5. it showed too that all the forces of the state, the media, the police, the courts, employers, racial prejudice and women’s inequality can be swept aside by the freshness and dynamism of determined struggle.

This is social history presented in Townsend Productions’ imaginative, particpatory, engaging style with songs and music of the 1970s.
THE DESIGN
We would like the image of Jayaben Desai to come out of the poster, can't seem to up load the high res. which is black & white & has more detail but can send that to you.We would like some colour on the poster too.
Copy
Townsend Productions (Logo) in association with Tara Arts, Harrogate Theatre, The Place, Bedford, The Old Fire Station, Ruskin College & Unite The Union.
Title: 'We Are The Lions Mr Manager'- is the inspirational story of Jayaben's fight for dignity in the workplace and the Grunwick Strike 1976- 78
★★★★ 'Tremendous' The Times
★★★★★ ' the best political theatre produced for a long, long time.' Morning Star
★★★★★ 'Outstanding' LONDON THEATRE1
We need space for overprint (venues) & space for a strip of logos. The poster needs to have impact and the title needs to be large but not too large. 'We Are The Lions Mr Manager' is a direct quotation from Jayaben so should be in inverted comma's.
In terms of look and style it's up to you.

Although our work is political and deals with serious issues
our work is humorous, imaginative, participatory and engaging and this particular show will have songs and music of the 1970s.

Get started now
Dreamworm Album Art
799 AU$
We make heavy music that people can dance to. The genre is called glitchmetal. Audience is anyone who is interested in h
70
entries
19
Designer
Australian Illusionist needs exciting poster for a new Illusion & magic show
799 $AU
A theatrical stage show that stars a modern day Illusionist that specialises in the art of Grand Illusion, Magic and Dea
94
entries
30
designer graphistes
Create Podcast Art for me
$199
I am starting a podcast called The Musical Lawyer and I need some cool cover art to go with my podcast.
43
entries
17
designers
Cover Art For Rock Band's New Single
CA$399
Rock Band
25
entries
7
designers
Design an album cover for Monochrome Seasons' new album!
CA$799
Monochrome Seasons is the solo project of multi-instrumentalist Antoine Michaud from Montreal, Canada. My music can be d
54
entries
14
designers
Design a Poster to Raise Awareness for Donating to a Film Festival
199 US$
Millenials, parents. Ney Jersey USA interests - independent cinema, art, broadway, craft food and cocktails, communit
56
entries
23
diseñadores
Learn more about poster design
See how it works