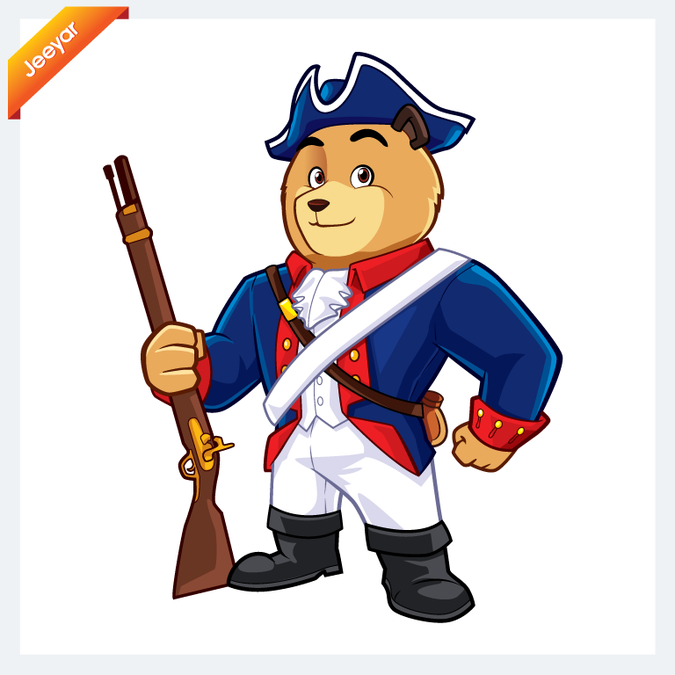 Jeff Perlot needed a new character or mascot design and created a contest on 99designs.

A winner was selected from 109 designs submitted by 40 freelance designers. 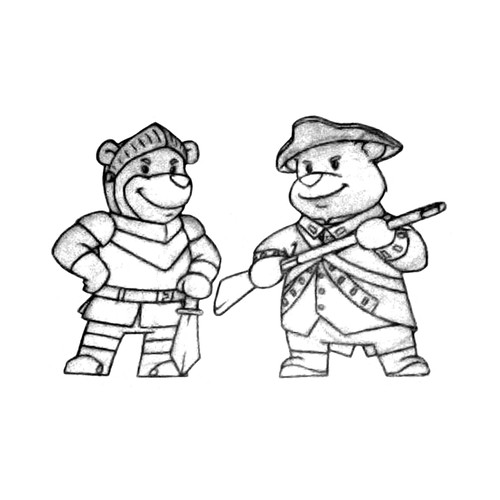 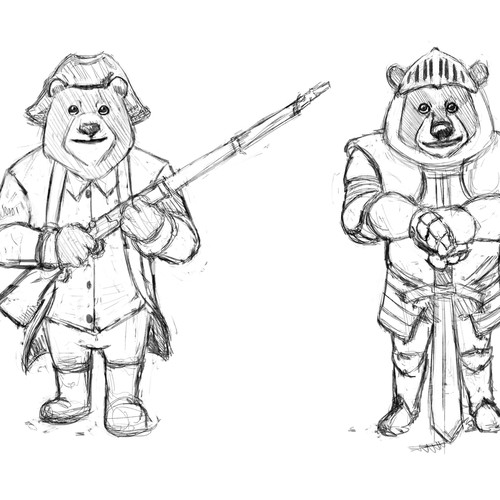 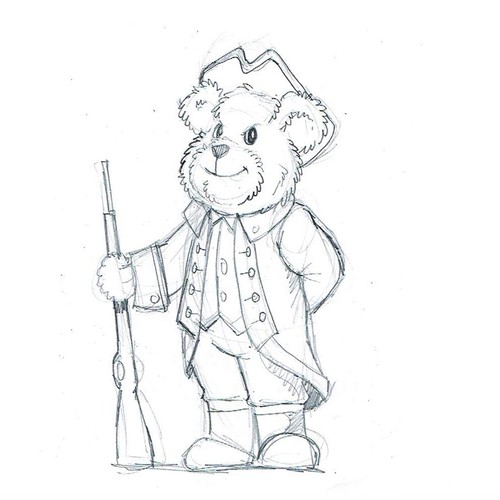 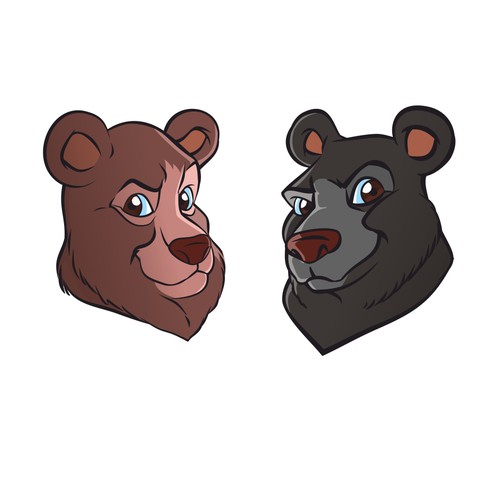 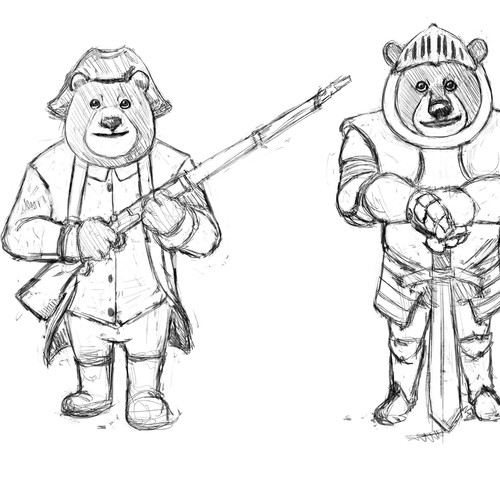 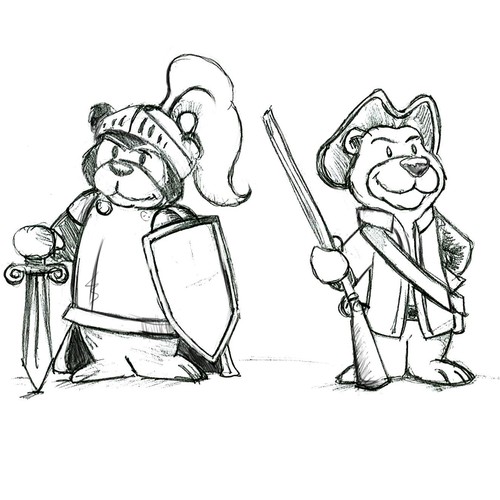 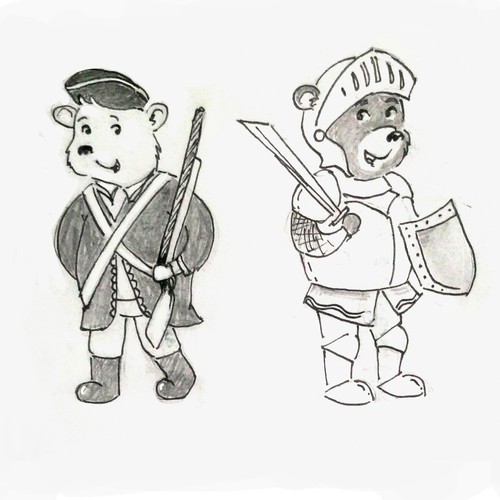 Finalist - moonchinks28
My designer was top notch. Excellent creativity, execution and was happy to make the changes I requested.
- sheila_consaul

Finalist - st_david
David is so talented and produced such a beautiful illustration for our project. It was a pleasure working with him and we hope to again in the future!
- sci.comm

How Jeff Perlot started their character or mascot journey

We create cartoon stories and toys that educate and inspire children around the themes of bravery, family, and faith.

We look forward to seeing your original and inspired ideas for two beloved characters that will appear in cartoons and be made into stuffed animal toys.

Character 1: A youthful Teddy Bear who is a patriot soldier from the U.S. Revolutionary War. This character is a Grizzly Bear. He will wear a patriot uniform and carry a musket. (You can design him with a patriots hat or not, whichever you feel looks better)

Character 2: A youthful Teddy Bear who is a British knight in shining armor from the middle ages. This character is a Black Bear. He will wear a knights uniform and have a sword. (You can give him a knights helmet if you choose, but if you design him with a helmet please make sure his face is visible.)

These characters will be fierce and tough, but at the same time are cute and lovable.

To guide your design inspiration . . .

1. Kung Fu Panda: This is an obvious one, because the characters are all likable but tough. Tigress is a good example of this combination of fierce but snuggly.

2. Characters from Toy Story and Cars: Lots of friendly faces.

1. Manga: We don't like this style at all. It's too edgy and and doesn't fit our target audience or the feel of what we are creating. We don't want anything that looks like Manga.

2. Teenage Mutant Ninja Turtles: This is a little too dark and edgy. Even though the characters have big smiles, they are a little too weird and oddball for us.

3. Marvel or DC Comic Book Characters: We feel this look is directed are older audiences and are too realistic, so we would like to avoid the look of the traditional comic book characters.

You are free to create pencil drawings for your initial submissions.

We will rate those, so that you know whether to spend the extra time creating full color illustrations.

Finalists will be asked to create full color illustrations of the characters.

Please be sure that your designs are 100% original.

Create a cartoon (NOT a caricature) from a picture
€249
We provide children entertainment....
62
entries
27
designers
Need 2 teenage characters - white boys - for animated comedy videos. MUST READ BRIEF
US$299
Young boys singing shock/crude humor songs in animated videos.
100
entries
40
designers
Create an illustration for a new children's opera
AUD 339
Opera Australia is an opera company. For this project, we are creating a new opera for children, to be performed in s...
41
entries
25
diseñadores
Create a character for a children's chapter book series
US$549
I write novels for kids who read at a 2nd-4th grade level....
180
entries
99
designers
Create a Dog character with a Police Box design for a T-Shirt
$349
We’d like to reach people who enjoy pop culture like us....
85
entries
15
デザイナー数
Come Dwell In Solomon's Walls
$349
I'm a novelist. Because my art sucks, i need to hire an artist....
17
entries
4
designers

We saved a spot for your character or mascot contest.

Get started now
Design a unique character for an EDM producer
USD 899
My product is electronic dance music, I am an EDM producing looking to create a character to be the face of my music....
136
entries
49
designers
Foo Dog Characters for Chinese New Year
SGD 1.299
Public and Community Based Events...
60
entries
32
designers
Mascot Design Contest
$ 549
We area full service commercial real estate company. we specialize in office, industrial and retail buildings. Our aud
50
entries
33
Designer
Character design for 2D Animation
CA$449
We do Animation and kids content.
131
entries
69
designers
LOGO and MASCOT for new MUSIC LABEL "SEWT"
899 CHF
Based in Zurich Switzerland, SEWT is a music production label focusing on producing talents in the pop, dance and rock g
158
entries
45
designer graphistes
Invent a Character for next generation of child education
SGD 499
The organization/product in conversation here is in Education Space for very small age kids (2 to 7yrs) . It may stay i
132
entries
34
diseñadores
Learn more about character or mascot design
See how it works