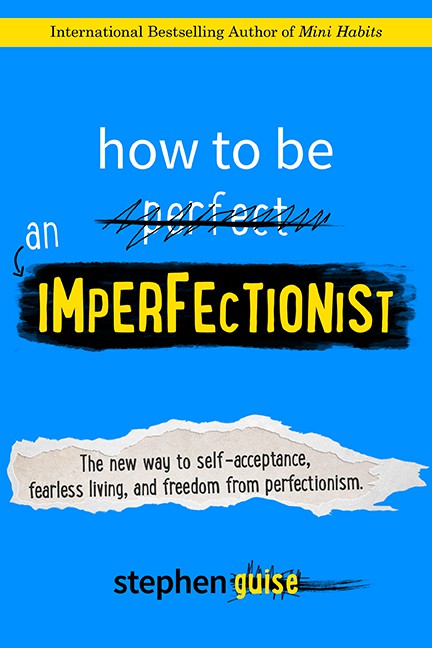 Self-help book cover design: How to Be an Imperfectionist (International Bestselling Author)

Sguise needed a new book or magazine cover design and created a contest on 99designs.

A winner was selected from 292 designs submitted by 72 freelance designers. 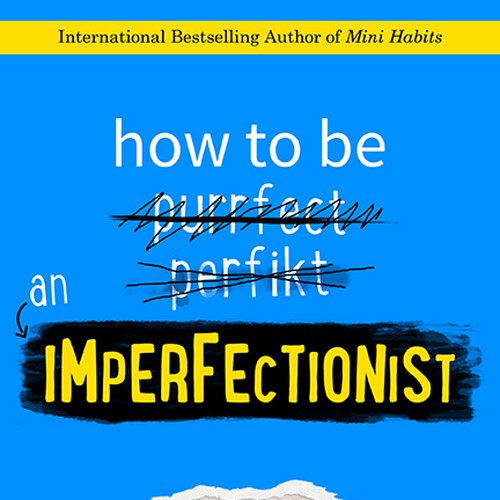 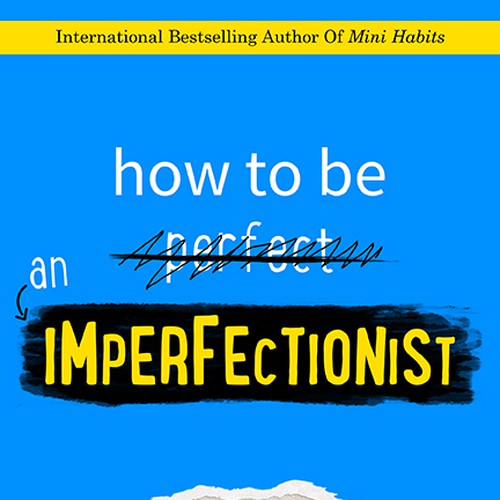 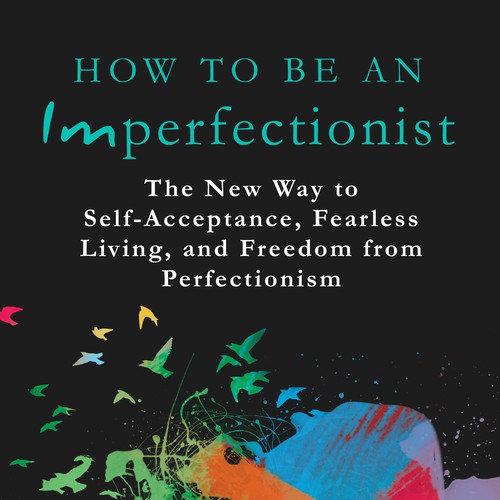 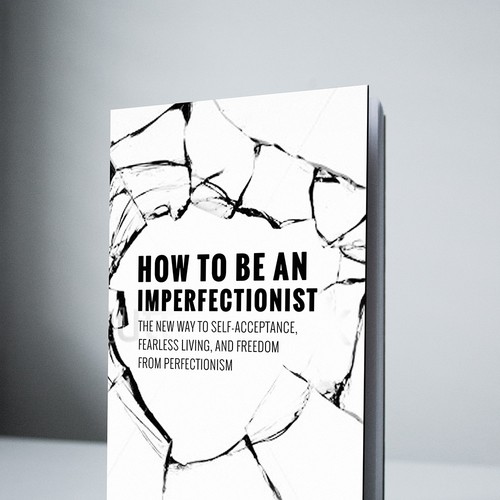 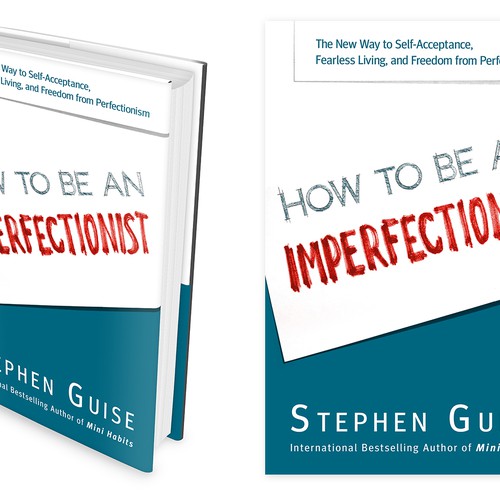 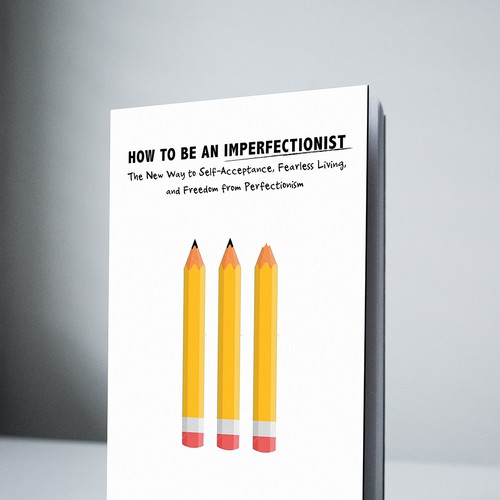 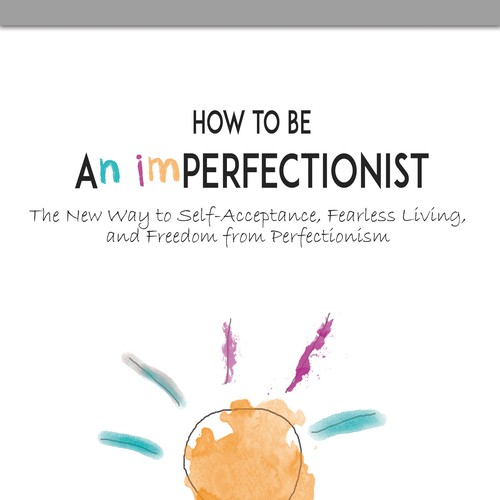 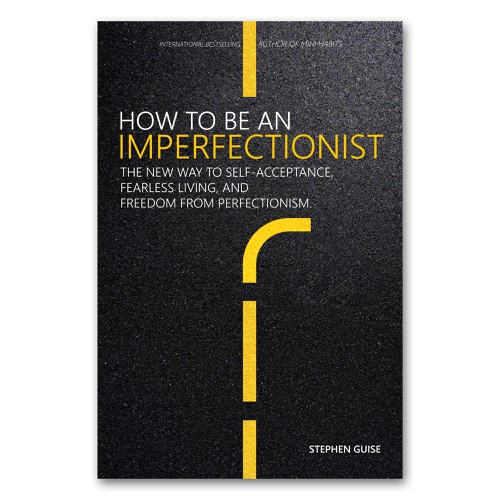 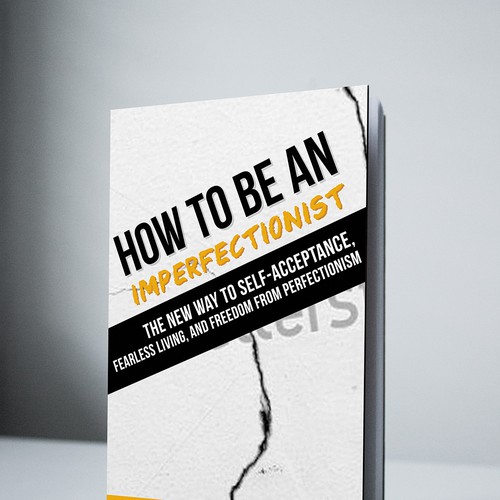 Winner - Hass Hijazi
It was a pleasure working with Hass! He is very professional and his designs are top notch. He is detail oriented, listens to feedback well and is able to make adjustments accordingly. I would highly recommend him to anyone looking for a designer!
- Anonymous

I write books that help people change their behavior.

My first book, Mini Habits, is being translated into a dozen languages and has sold well over 40,000 copies. It's a top 2,000 selling book in the US even today (30-40 ebook copies sold per day). I expect my new book to do well, too. If you win this contest, I'll add "cover design by (your name)" somewhere in the book.

Here's my new book, including all of the text I need on the cover:

For my next book to do well, I need a fantastic cover! I'm looking for an eye-catching cover that intrigues and excites people for the book, which already has the benefit of an intriguing title.

THE CONCEPT: The idea of the cover is to convey imperfection in some way, and it's a bonus if that imperfection can be shown to be positive (like a guy tripping across the finish line—it's imperfect, but he wins. Or coloring outside the lines turning into something cool). I'm not sure how easy it would be to convey that complex of an idea without making it too convoluted.

I prefer simplicity. For example, look at how simple my first book's cover is: http://www.amazon.com/dp/B00HGKNBDK

I WANT YOU TO BE CREATIVE. I'm not 100% sold on any of the following ideas. If you think you can make one of these current ideas shine, by all means go for it. But if you have a unique idea, it will make you stand out.

I don't want something generic, like a stock image of an arrow outside of the bulls-eye against a white backdrop that looks like it was put together in MS Paint (and there are probably 10 other books that have done this).

What to aim for: Unique, creative, simple, and clear, with smartly placed and designed text

1. Doing something different with the "im" part of "imperfectionist" as the "im" is a modifier of the common problem of perfectionism. For example, "perfectionist" could be nice and clean and "im" could be sloppier, but more fun?

2. Coloring outside the lines—either the title text or a separate "prop" on the cover (like a shape)

3. I think a design with stick figures could work well. Maybe something where there's a group of perfectionists except for one who is choosing imperfection. I don't mean a generic stock photo where one person in a group is orange. Different is not the same as imperfect!

5. Any other idea that communicates the freedom of "imperfectionism."

6. The crumpled paper thing has been overdone, but I like it. Maybe some kind of torn paper concept could work, like tearing away paper to reveal the "im" in "imperfectionism"...

7. A possibly fun and unique cover I thought of was writing "How to Be an" on the top line, and then having a series of misspellings that are crossed out. For example:

8. Eraser marks could be utilized, as that means mistakes have been made.

There are a lot of things you could do. Doing one of them well is the hard part!

FEEL: I want the cover to have a fun, free-spirited feel. This probably means bright or varied colors. The people reading this book are trapped by their perfectionism, and this book is their ticket to freedom (I'm not just saying that to sell books, I believe it). Showing imperfection alone on the cover is a great way to achieve that relaxed feel that says "it's ok when things aren't perfect!" So bright colors aren't necessarily required.

FEEDBACK:
I will try to give prompt and useful feedback. This cover is very important to me, so I will do my best to enable you. I may not have time to respond to everyone. If I just give you a rating, here's what you can assume:

1 or 2 stars: try something else.
3 stars: I'm not sure about it. It could have some amount of potential—either I like your design sense or I like the concept, but it would need polishing. Try variations on the concept or a new concept if you choose.
If I rate it 4 stars, I like it. Keep going with that idea. You can also submit other ideas, of course.
5 stars means I'm impressed and you have a chance to win.

FIRST ROUND: Focus on concepts. They don't have to be perfectly polished, but if they're too sloppy, I won't be able to see past it. In this round, I'd recommend concerning yourself less with things like color, and more on layout and concepts, like where you'll place text, what graphics and ideas you'll draw/use.

If you're manually drawing it, first of all, you're awesome. You could send me uncolored sketches if you want. If knowledge serves me, coloring takes the most time, so that would make sense.

SECOND ROUND: This is the stage for refinement. We'll have more back-and-forth discussion on your design's intricacies.

Submit a design! It'll be fun, and if you win, it could be seen by many thousands of people!

Drawn submissions will be given preference over stock image submissions.

The attached image is the prior cover design, using the "color outside the lines" idea. Before you copy it, keep in mind that I'm here seeking a NEW cover! While I think this one is okay, it doesn't have that polished, put-together look I want. If I were a designer, maybe I could tell you why, but I don't know. It just isn't what I want. See if you can beat it.

Create a new cover to relaunch a highly reviewed Captain Hook novel
$299
I write dark fantasy books for (65% male) readers from 15-32 years of age....
85
entries
25
デザイナー数
I want to build a lasting business relationship with ALL of my clients.
£199
Author, writer of action, crime thrillers. Target audience will be fans of the genre (ie NOT YA sci-fi and fantasy r...
58
entries
13
デザイナー数
The Centaur Chronicles, written by award-winning author, needs a fabulous, eye-catching cover!
US$ 499
I write fantasies and novels for Middle-grade and Young Adult...
66
entries
17
designers
Threads of The War book covers
$299
I write historical fiction novels....
44
entries
11
designers
Create a Beautiful, Custom E-Book Cover For an Inspirational Christmas Story.
$799
I'm a writer who has just finished (re)writing a fiction book I plan to put out on Kindle. I also plan to have it out...
76
entries
22
デザイナー数
Dark Romance Erotic Cover; Title is Buttons and Lace
$1,199
Dark Romance Novels...
134
entries
21
designers

Get started now
My River Sanctuary book cover
399 A$
Independent book publisher (individual)...
20
entries
12
designer
"The Critic," a literary thriller needs a killer book cover!
299 $US
Hello Designers! I am looking for a book cover. It falls under the literary genre, but with a thriller element. M...
73
entries
22
designer graphistes
Book Cover Design For First Book In Series - Fun Chick Lit/Romance
US$299
Galahads Press is a self-publishing company. We are focused on writing fiction in the chick lit genre with a focus o...
50
entries
13
designers
Eye-Catching Vampire Novel Cover
€279
The book is a Vampire Novel. The aiminggroup should be mainly females between 25-45....
169
entries
31
designers
Cover for Dark Fantasy Series (ebook and paperback)
€279
Dark Fantasy Book Series Titel: Unstern Author: Katrin Ils...
193
entries
42
designers
"Emma" a short story that needs a book cover
$299
Hello Designers! I am looking for a short story cover. It falls under the literary genre. My future readers are A...
105
entries
39
designers
Learn more about book or magazine cover design
See how it works