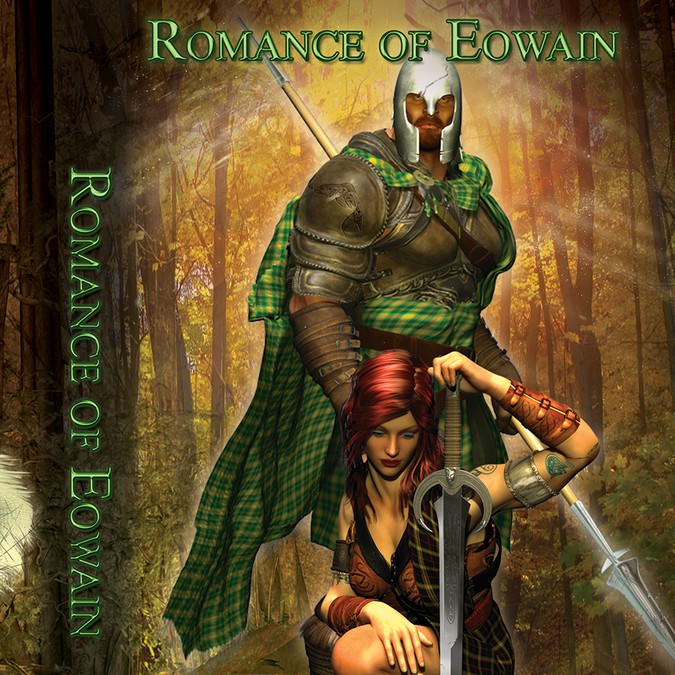 Create a book cover for an exciting fantasy adventure!

mdellert1172 needed a new book or magazine cover design and created a contest on 99designs.

A winner was selected from 13 designs submitted by 5 freelance designers. 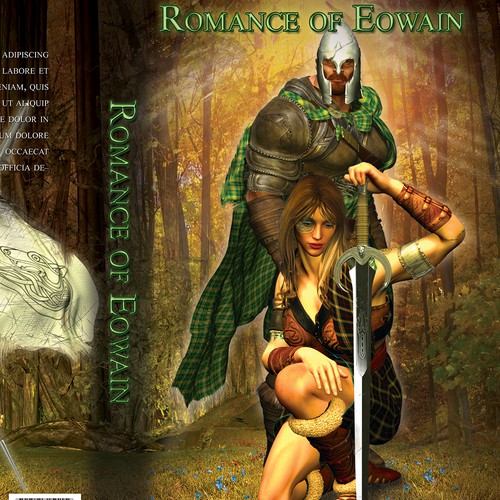 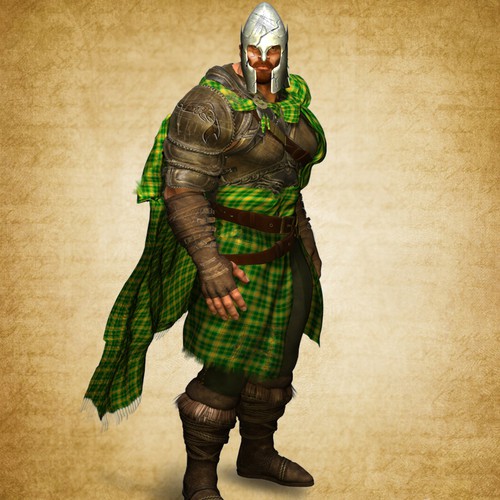 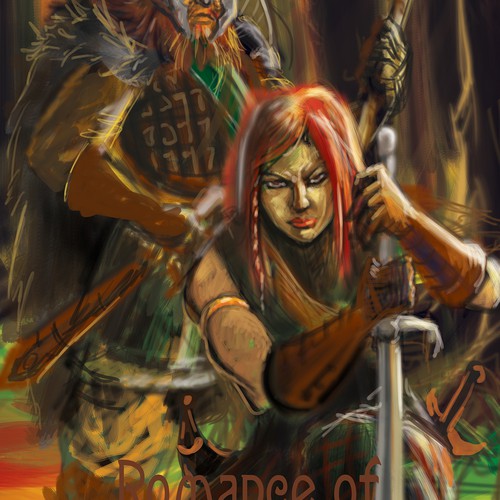 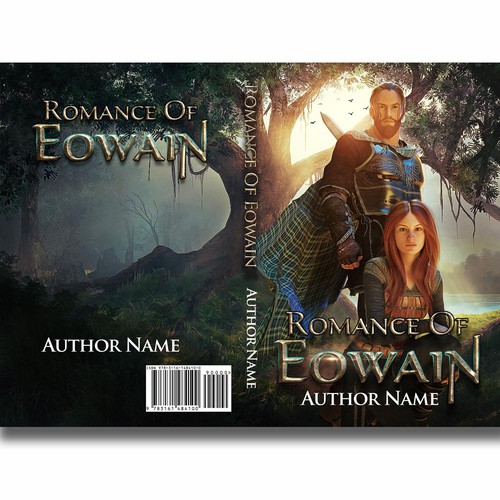 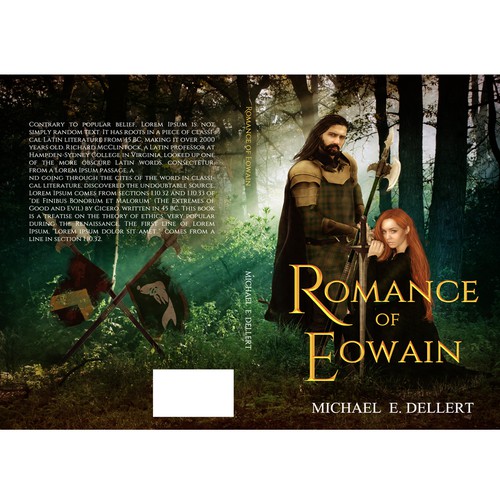 Winner - ritza
The job was to design a book cover for a medieval fantasy romance with a hint of lurking evil. Rita was attentive to my obsessive-compulsive notes on the details of the work, and produced a world-class cover design that I'll be proud to feature on our book. I gladly recommend Ritza to anyone, and I will be happy to work with him again.
- mdellert1172

The title is “Romance of Eowain.”

Below are the details. The cover is for print as well as digital, so I would need front, back and spine, as with the last cover. I’ve included a CreateSpace template for reference. I’ve also attached a zip file with some idea files. My timeline is to have the completed cover within 4-6 weeks (February 16-March 1).

Eowain, a young man and new to the throne of an insecure kingdom, has been set up with an arranged marriage to Eithne (young woman, same age). Their families have been feuding for several years, and their wedding (on the surface) will bring peace to the two families. But the wedding is being driven by the priesthood, who seem to have some other agenda, and is opposed by members of Eowain’s own family (particularly his elder cousin and rival).

Eowain is the primary point of view character. This story ends with their wedding still pending, and their romance still unresolved. The present complication of a rivalry with Eowain’s vengeful older cousin is the principal obstacle they struggle with in the story, and there is sense of a “lurking evil” at work in the background.

• Eowain1.jpg shows the position and general costume/attitude I’m looking for from Eowain, though with more Celtic flare, and with cloak and kilt in appropriate colors (green, gold, white).
• Book Cover Sketch 1 and 2 are early efforts for a previous title. The featured character in the sketches is Eowain, in two poses. These are for character reference.
• Hedge King Cover Design 4 is a 300dpi render of the final cover of a previous title, featuring Eowain. Again, for character reference.
• The tartan and salmon images are reference for costume and heraldry details (see below).

*Eithne:* 20-something, red-haired. A “maiden of virtue,” a young woman of exceptional grace, wit, and beauty, daughter of a powerful noble, charms and impresses all who meet her, skilled in the playing of musical instruments and other artistic accomplishments, properly respectful of her parents, yadda-yadda, etc. But she’s not a wallflower, coming from a remote clannish mountain realm with a strong warrior tradition. Family tartans are black, green, and white, the family symbol is three wolf-heads (also stylized in Celtic fashion). In the zip file, find the following files for reference:

• Eithne1.jpg is the primary reference for Eithne. This pose, posture, general attitude. The costume is a little too 14th century and not enough 12th century, and should be more coarse, but general idea and the trim is ok. There will be *no* magical lightning around the sword.
• Eithne2.jpg and Eithne3.jpg are additional character references for when she’s not being quite so demure. She could just as easily pick up sword/spear and throw on a shirt of mail and be ready to kick-ass. The tartan skirt in Eithne3 might be a better model for the costume in Eithne1.
• The Wynn heraldry, wolf’s head, and tartan images represent her family colors (gold and red on a black background) and heraldry ideas (see below).

*Heraldry:*
Both characters have unique family heraldry (see below regarding back cover, but anywhere their heraldry can be included in their own costume is also useful). In the zip file, see the following files for reference:

• Eithne:
• wynne_large.gif: The Wynne heraldry is too continental, too 15th century, and in the wrong colors, but gives a general idea of what I have in mind for Eithne’s family banner. Replace the green background with black, replace the white wolf heads with red wolf heads (see next) and make the chevron background gold and without the foreground decoration. The shield, family name, helmet and other flourishes can be dispensed with.
• vector_celtic_wolf_by_lupas_deva-d53va8q.jpg: This Celtic Wolf image would replace the wolf’s heads in the Wynne heraldry, with the lines drawn in red.
• Eowain:
• f3b7c1e4032c0c275cd2f8ca72a7f785.jpg: The Celtic river salmon. For Eowain’s banner, it would be horizontal with the salmon’s head to the viewer’s left, in white, on a green background with gold trim.
• See also Hedge King Cover Design 4.jpg, where the heraldry can be seen on the ribbon banner over Eowain’s head.

*Scene:*
*Front:* In the zip file you’ll find a very poor mockup of my idea for the front cover scene (cover_idea.jpg). I’m thinking we have Eithne1 in the foreground, genuflecting with the sword. We can make the sword very plain and dispense with the magical lightning. Eowain1 stands behind her, erect posture and with full war-kit, the look on his face challenging the viewer over the top of Eithne1’s kneeling form. The spear in his left hand should be more detailed/focused (a family heirloom). They are outside, with the forest close behind them. Season is mid-spring, with May Day just around the corner, so blooming and blossoming is the order of the day. Trust and loyalty are strong themes in the story, and the whole should have a sense of lurking evil and foreboding in the background.

*Back:* I’m thinking for the back that the background forest scene continues, and in the foreground are two crossed spears from which are hanging the family heraldry of each character (Eowain and Eithne) on ragged war banners.

Get started now
Ranjit More needs a new book or magazine cover
$ 299
For a Fantasy novel set in the Hindu mythological Universe. Fiction.
42
entries
15
Designer
Moving book cover required for book about an orphanage in Romania
£ 199
Ebooks...
442
entries
73
designers
Design an irresistible, powerful, book cover for a political thriller set in Paris
499 $US
Self Publishing THE PARIS PLOT, a novel (www.theparisplot.com) through Oakhurst Print, my company. Publisher of ficti...
147
entries
34
designer graphistes
Create a book cover for The Happiness Book: A Positive Guide To Happiness!
$ 299
The Happiness Book: A Positive Guide To Happiness! is a self-help book that teaches people how to be happier....
101
entries
19
Designer
Design a Catchy Book Cover for a Dystopian Novel
AU$ 399
Books for young adults and children. For further information look at http://www.lomoco.de...
68
entries
9
Designer
Book cover needed for humorous pregnancy book.
AU$ 399
My mother (Vicki Bryce) and I have written a book. Title: Hatch and Dispatch Subtitle: Tales and advice from a mid...
113
entries
31
Designer
Learn more about book or magazine cover design
See how it works